I can surely say that I truly know Bács-Kiskun county, since I was born in Ordas, a small village along the river Danube, as the third child of a pastoral family, and then I was 10 years old when we moved to a neighbouring village, Dunapataj. Here I finished my primary school studies at the Zoltán Kodály Primary School of Music. Like my brothers I was also admitted to the Grammar School of the Reformed College of Debrecen where I graduated in 1992. After a brief period of hesitation, I completed a two-year secretarial training course and then for a year and a half worked in a cold store in Baja, employed by Unilever, as a quality assurance administrator. My career as a librarian began at the Community Centre of Germans in Hungary as a school librarian while at the same time, I was completing my Library Sciences studies at Eötvös József College. During my preparation for the final exam I received an offer for a librarian position alongside Pastor Zsuzsanna Szabó in Kecskemet. Among the office workers I am one of the oldest employees as I have been working here since July 1st, 1999. In 2003 I gained Master of Arts in Library Sciences at the Faculty of Humanities and Social Sciences of University of Szeged with a major in old books. I have been running the library since January 1st, 2008 and in 2013 I was entrusted with the management of the archive and the editorial of the Új Szőlőskert (New Vineyard) church newspaper. I am in my second term as the member of the Diocesan Collection Committee and in my first term as a member of the Diocesan Council. Since 2016, I have also been editing EMMAUS, the yearly diocesan newspaper. This year I accomplished a 120-hour accredited Management Skills course organized by the Library Institute. I have been a presbyter of the congregation since January 2018 and a notary of the presbytery.

I graduated in Szeged with a degree in history and IT library. I have been working at the library since 2009 where I am in charge of the library and graphic design: managing the plan repository and the website of the library, arranging interlibrary loans, and helping our readers as an e-consultant. In addition to the library stock we also have a collection of artefacts which contains a large number of paintings, graphics, figurines, sculptures, medals, coins and accessories of traditional folk clothing. My responsibilities include processing and maintaining this collection. As a graphic designer I am involved in the editing of the Új Szőlőskert (New Vinyard), Emmaus, and Lélekápoló (Soul Care) newspapers and other graphic tasks related to the Church.
Due to the diversity of my work I am never bored and I can get to know and do work in several fields which I enjoy with all its advantages and disadvantages.

I graduated from the Eötvös József College of Baja in 2005 as a cultural manager and a year later I also graduated as an IT librarian. I started working as a librarian in the Library and Archives of the Reformed Church of Kecskemét in August 2005. I was comfortable with my surroundings from the beginning, as I graduated from the Reformed Grammar School of Kecskemet.
In 2005 I gained an intermediate German language exam then I completed an e-consultant training since our institution, as a public library, also operates as an eMagyarország Pont (eHungary Point).
In addition to customer service and lending my role in the library includes performing administrative tasks and filing documents.
I love my work because of its diversity including everything from cataloguing to serving readers.
I got married in 2007 and have been a happy mother of two since then.

I have been working in the Library of the Reformed Church of Kecskemét since 2001. I was delighted to receive an invitation because after 10 years I was able to work again in a church library. I came from Germany and I got my library degree in Leipzig. I completed my compulsory internship in a county library in Berlin. After this I became the librarian of the Library of Diocese of Berlin-Brandenburg. In 1988 I married my husband and moved to Hungary. After the birth of my twin daughters I came to the library as the third employee. My main task was to manage the magazine repository which includes supervising the newspaper from ordering to registration and then processing. Over the years I have processed several articles from theological magazines and in recent years instead of registering a card catalogue I have been developing an electronic catalogue with the help of our website. I am happy to complete tasks like lending and customer service and I am often asked to translate or proofread German texts. 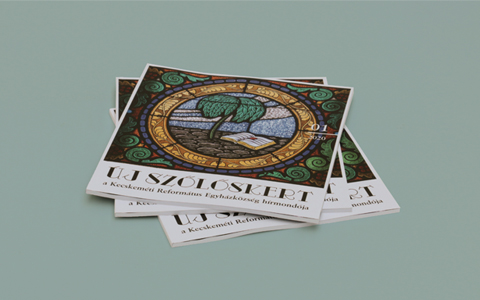